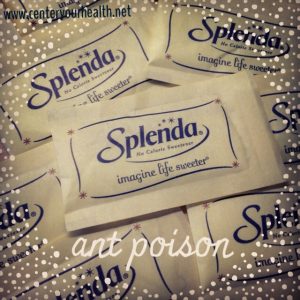 Lammer & I had an ant problem this summer.  Small black ants seemed to set up camp over this one corner of our kitchen counter area.  NOT COOL.  Ant killers (or any insecticide) is dangerous stuff that I don’t want in our home, especially around our food.  Sooo, I stole a few packets of FREE Splenda from around town, broke a few open and sprinkled along the edges of our walls and wherever I saw the little buggers.
I observed them at first.  They’d pick up a morsel of the toxic Splenda and march back on their way to wherever their “base” was.  My heart broke a bit because I knew they would never make it back to our countertop…because once they went home and consumed that sweet Splenda, it would kill them.  So little by little, less and less ants were apparent.  This went on for about 2-3 weeks, so it does take time.  But it DOES work.
The makers of Splenda were scientists trying to design an insecticide.  Instead, they came up with something that is super-duper sweet and packaged it in pretty little packets for humans to stir into their coffee or other drinks.  The world we live in is so backwards.
Uh, what’s the difference between an ant and us?  SIZE.  What’s going to kill that ant will eventually kill us.  So Splenda is something that I would NEVER, EVER, in a million years recommend to anyone.  This includes any other artificial sweeteners…Equal, Sweet N’ Low, Nutrasweet, etc.
Splenda = Ant Poison
Tuesday, August 13th, 2013
By Lauren
Posted in: Health