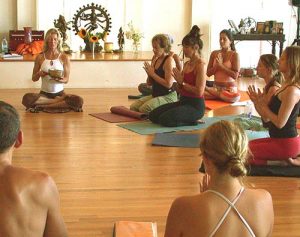 Clients come to me confused as to what yoga they should try, or they are intimidated by the strange names that they are scared away. Vinyasa, ashtanga, kundalini, hatha, anusura…so many styles of yoga, but what is best for you?

There are so many different lineages and styles of yoga that it can be pretty overwhelming, especially as a beginner. Here is a brief breakdown of the most popular styles of yoga out there for your convenience. See which style best resonates with you and then attend a class in your area. Remember to introduce yourself to the teacher, letting them know you’re new to the class/style. Never push yourself to keep up with the class, and only do what feels right for your body.

All styles of yoga stem from the same basic principles. Each style is based on the same physical postures (called asanas) with particular emphasis.

HATHA
Hatha is a very general term that can encompass many of the physical types of yoga. If a class is described as Hatha style, it is probably going to be slow-paced and gentle and provide a good introduction to the basic yoga poses.

VINYASA
Like Hatha, Vinyasa is a general term that is used to describe many different types of classes. Vinyasa, which means breath-synchronized movement, tends to be a more vigorous style based on the performance of a series of poses called Sun Salutations, in which movement is matched to the breath. A Vinyasa class will typically start with a number of Sun Salutations to warm up the body for more intense stretching that’s done at the end of class.

ASHTANGA
Ashtanga, which means “eight limbs” in Sanskrit, is a fast-paced, intense style of yoga. A set series of poses is performed, always in the same order. Ashtanga practice is very physically demanding because of the constant movement from one pose to the next. In yoga terminology, this movement is called flow. Ashtanga is also the inspiration for what is often called Power Yoga. If a class is described as Power Yoga, it will be based on the flowing style of Ashtanga, but not necessarily keep strictly to the set Ashtanga series of poses.

IYENGAR
Based on the teachings of the yogi B.K.S Iyengar, this style of practice is most concerned with bodily alignment. In yoga, the word alignment is used to describe the precise way in which your body should be positioned in each pose in order to obtain the maximum benefits and avoid injury. Iyengar practice usually emphasizes holding poses over long periods versus moving quickly from one pose to the next (flow). Also, Iyengar practice encourages the use of props, such as yoga blankets, blocks and straps, in order to bring the body into alignment.

KUNDALINI
The emphasis in Kundalini is on the breath in conjunction with physical movement, with the purpose of freeing energy in the lower body and allowing it to move upwards. All asana practices make use of controlling the breath. But in Kundalini, the exploration of the effects of the breath (also called prana, meaning energy) on the postures is essential.

BIKRAM/HOT YOGA
Pioneered by Bikram Choudhury, this style is more generally referred to as Hot Yoga. It is practiced in a 95 to 100 degree room, which allows for a loosening of tight muscles and profuse sweating, which is thought to be cleansing. The Bikram method is a set series of 26 poses, but not all hot classes make use of this series.

ANUSURA
Founded in 1997 by John Friend, Anusara combines a strong emphasis on physical alignment with a positive philosophy derived from Tantra. The philosophy’s premise is belief in the intrinsic goodness of all beings. Anusara classes are usually light-hearted and accessible to students of differing abilities. Poses are taught in a way that opens the heart, both physically and mentally, and props are often used.

JIVAMUKTI
This style of yoga emerged from one of New York’s best-known yoga studios. Jivamukti founders David Life and Sharon Gannon take inspiration from Ashtanga yoga and emphasize chanting, meditation, and spiritual teachings. They have trained many teachers who have brought this style of yoga to studios and gyms, predominantly in the U.S. These classes are physically intense and often include some chanting.

INTEGRAL
Integral yoga follows the teachings of Sri Swami Sachidananda, who came to the U.S. in the 1960s and eventually founded many Integral Yoga Institutes and the famed Yogaville Ashram in Virginia. Integral is a gentle hatha practice, and classes often also include breathing exercises, chanting, kriyas, and meditation.

What is your favorite style of yoga?