Interview with a Paleo

In order to be a successful health coach, I have to be hip and open to all of the different “diets” out there, which is certainly an interesting part of my job.  These past few years, I’ve taken such an interest in a primal (or better known as paleo) diet because it’s very reminiscent of the Weston A. Price Foundation’s “diet”, and have decided to interview someone who strictly follows it.  Sean is a close friend of my brother whom I’ve reached out to a few times with some questions I’ve had about it all. Since he’s totally the real deal paleo, I told him I had to represent him on my blog!

CYH: 1. What made you shift your food choices/lifestyle to a more primal one? 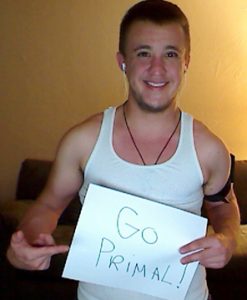 Sean: There were many factors that contributed to my decision to go Primal/Paleo, but the main reason was that I really liked the simplistic, yet common-sense principles of food consumption, physical movement and lifestyle choices that it brought to the table.

Five years ago, I began to gradually cut out refined sugars, white breads, pasta and rice, but continued to consume brown rice, wheat pasta, cane sugars, processed foods, alcohol and a ton of dairy. While I did lose 30 pounds and became much healthier during those first 3 years, I was still taking a lot of prescription meds for intestinal problems such as GERD, IBS, colitis and constant discomfort. I sort of thought that gluten and dairy might be contributing to these problems, but I stubbornly didn’t want to give them up, so I made excuses and blamed my problems on bad genetics instead.
It wasn’t until about 2 years ago when my sister and brother-in-law went Primal/Paleo that I began to really take a hard look at what I was consuming and how and why it was affecting me negatively. After constantly “Paleo Preaching” at me for months, they finally said, “Just try it for 30 days, dude. We promise you won’t be sorry. What do you have to lose?”
I agreed and did it for 2 weeks. Then 2 more weeks. Now I am almost a year into it and I can’t imagine ever going back.
Obviously, once I started eating Paleo, the weight began to come off quickly. I’ve currently lost a total of 50 pounds since 2008, with the last 20 coming off over the past 10 months.
I’ve enjoyed being outside in the sun, biking, doing sprints, lifting random heavy things and not worrying about having a strict exercise routine. Having that freedom to move as fast or as slow as I want, whenever I want, is why I love being Primal.
CYH: 2. How hard was it to make the shift, and do you feel like it’s easy to maintain?

Sean: After those first 2 weeks of eliminating grains, sugars and processed foods cold turkey, my body totally crashed. I was shaky, anxious, tired, confused and moody. The detox was really a shock to my system, but once I got past a certain point and my body got cleaner, it really wasn’t hard to maintain.
Unfortunately though, as many people do in the beginning, I struggled when the weekends came around. I went through the “Paleo sabotage stage,” still drinking beer and eating pizza or nachos, while telling myself, “I’m only cheating a little bit, everyone in the community admits to it, so it must be ok!”
Turns out, that routine sabotage was actually really damaging my weekly cleansing efforts, and making me feel really bad about myself. So I buckled down and forced myself to go strict Paleo and stay there. I didn’t go out with friends, and if I did, I ate before I went out. I didn’t drink alcohol, I didn’t allow myself any temptations. It was totally what I needed.
To this day I still struggle with cravings for cheese and ice cream, but not pasta, breads, cakes or pastries. And if I allow myself to eat something that is not Paleo, it’s usually a small amount. After I acknowledge what I did and how it made my body feel, I let it go and move on. For me it’s been the best way to deal with a potential derailment.
As for the other aspects of Primal living, I feel that those came easy to me once I got eating Paleo under control. I was sleeping better, working better, moving around better, communicating better and becoming happier and happier, which opened me up to making more positive changes in other areas of my life.

CYH: 3. I find that many people are drawn to the paleo “diet” because it’s a meat-based diet, and meat is something that many people enjoy having.  However, when following a paleo approach, the meat should primarily be from healthy animals (grass fed/grass finished, organic, free range, etc.), but healthy meat is pretty hard to come across in a regular supermarket, especially while dining out, and it sure is expensive.  How much would you say you purchase/consume healthy meats over factory farmed/generic meat that is what most restaurants and supermarkets serve/sell?  Also, where do you primarily get these animal products from?
Sean: This is one area that I do struggle with, but not because healthy animals are hard to access where I live in Gainesville, FL. It’s because I am on a fixed budget so I can’t afford perfectly healthy meat all of the time. I focus on buying free range, organic and antibiotic and hormone-free products, and when I can afford it, grass-fed beef, but I do have to settle for generic supermarket meat most of the time.
I try to purchase my meats from local markets who focus on farm-raised and organic products and stores like Trader Joe’s, Fresh Market and Publix (an awesome supermarket we have in Florida). In the beginning of my journey I was without a car, so I biked, walked, rode the bus and bummed rides from friends to “hunt down and gather” my food. Having to put in that extra effort in a town that is pretty spread out, really made the whole food consumption process mean something more to me.
The concept of buying healthy proteins, is one of the main reasons I love Paleo, but I agree that the cost of those proteins can become a roadblock for some Paleo-ers. However, I think that if you are doing the best you can with what you have, and you feel happy and healthy, then you should be proud of yourself. When you stress about achieving Paleo perfection you are doing your body more harm than good. Embrace the revolution and the evolution.

CYH: 4. I’d love to hear about how living a primal lifestyle has changed you both physically and emotionally. Anything else you’d like to add about being Paleo?
Sean: Eating Paleo and living Primal simplified, yet enhanced my outlook on life. This lifestyle is easy to maintain because it’s easy to achieve. By choosing to take responsibility for every little thing I put in my body, I’ve:
– Learned to cook better
– Discovered new foods
– Increased my will power
– Gained physical and mental strength
– Made new friends
– Lost body fat and more importantly, my wheat belly
– Gave up high-impact cardio and extreme weight training
– Increased my pull and push-ups amounts
– Maintained awesome energy levels
– Inspired other people
– Managed stress better
– Found my passion for exercising again
– Reconnected with nature
– Gained the ability to reign myself in quickly if I stray
– Learned a lot about nutrition, science and farming
CYH: Thank you, Sean, for sharing.  You totally rock!
Monday, July 8th, 2013
By Lauren
Posted in: Health