Finding the blessing in an injury 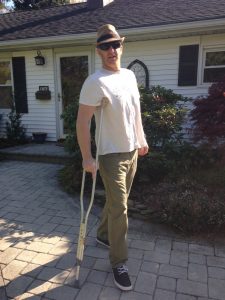 Back in March Lammer went out for a surf while I was taking care of some things around town. I got a call from him saying that he was in the back of an ambulance and that he thought he broke his ankle. Since all he ever does is joke with me I said, “Yea, yea, yea. What time will you be home for dinner?” “This is not a joke, I’m being rushed to Monmouth Medical and am in the back of an ambulance right now.”

The poor guy had a spiral fracture in his ankle from a freak moment during his surf session. That meant no work for him for at least 10 weeks until it healed. As we sat in his orthopedist office I drafted my plan for him nutrition-wise to make sure that his body was being provided exactly what it needed to thrive and repair the damage done, so that he could heal well and fast. I fed him collagen powder each day (in his coffee, he never even knew it – HAHA!), mineral-rich bone broth (via soups, meals, etc.), plenty of leafy green vegetables, probiotics and probiotic-rich foods, fatty fish (for omega-3s), and was sure to limit his sugar intake now that he was going to be a slave to whatever I had prepared for him each meal!

Anyway, we both had to adjust to being together for 24 hours a day, 7 days a week. It was actually great practice for me to take care of someone else at every moment…that is going to be my life in the very near future with this peanut growing in my belly!  Everyone joked that we were going to drive each other crazy and to be honest we were both a little hesitant to see how things would go. 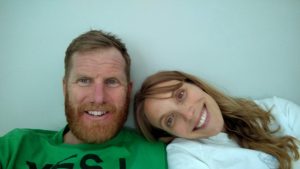 Here we are, 10 weeks later. His ankle has completely healed 100% and he goes back to work next week. Believe it or not, we’ve had SUCH a great time together. I’ve loved taking care of him and nursing him back to health. He has enjoyed my care and all of the time that we’ve had together. We both came to realize that even though this was an unfortunate injury on his end, it’s allowed us this time to be completely TOGETHER. Quality time together, lots of it. Something that we’re not going to have once our baby comes. How much of a blessing is that right there?